Our Screen 2 November film will be A Prophet (Un prophète), the story of a young Arab man who works his way up to become a Mafia kingpin of a French prison.

A Prophet is in French with English subtitles.

Malik is a petty criminal sentenced to 6 years in prison. Gangs of Corsicans and Arabs struggle for power inside the prison, and Malik is coerced into taking sides by murdering another inmate. He soon discovers opportunities for success and starts to rise through the ranks. Like the gangster epics Goodfellas and Scarface, this is a film about what power allows you to do and what it can do to you.

Rolling Stones said "Director Jacques Audiard scores a triumph of the highest order with the defiant poetry of his vision" while the Guardian describes it as "a blisteringly ­powerful prison-gangster picture".

A Prophet will be shown on Thursday 17th November, at Oasis in the Community Centre, Lostwithiel. Doors 7pm, film 7.30pm. BYO drinks. Tickets cost £4 for adults and £2 for under 18s, and are available online now or on the door if not already sold out. 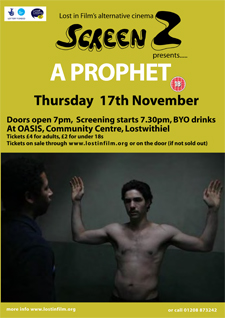