Wurlitza presents a Cottage on Dartmoor 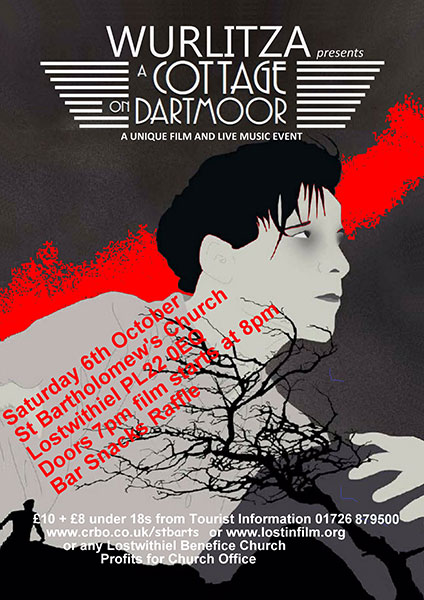 Screening of a thriller of love, jealousy and hairdressing accompanied by Wurlitza, a critically acclaimed five-piece band from South East Cornwall who have been specialising in adding live soundtracks to silent films since 2006.

Said to "Out-Hitchcock Hitchcock", Anthony Asquith's A Cottage on Dartmoor uses every cinematic technical trick available to create a story of jealousy and suspense. It is a snapshot on the rise of early talking films, cleverly woven into a plot that involves an escaped convict, a love triangle and, naturally, hairdressing.

Starring Swedish actor Uno Henning as Joe, we follow his escape from Dartmoor Prison and through a series of flashbacks, his interactions with Sally (Norah Baring) and Harry (Hans Adalbert Schlettow).

A Cottage on Dartmoor is much more than just about love and hairdressing. It is a history of the biggest change to hit the film industry since it began; the new "talkies". Everyone is talking about them. And so with the trim of scissors come tales from the cinema and topical subjects of the time. The talkies certainly did bring big changes; directors could no longer use multi-lingual international casts as Asquith does in A Cottage On Dartmoor. Asquith shows off his technical artistry in with rapid montages and carefully framed images. Watch out for the flash of colour!