Our June film will be An Education, a charming coming-of-age tale powered by the strength of relative newcomer Carey Mulligan's standout performance. With a screenplay by Nick Hornby, and directed by Lone Scherfig (ITALIAN FOR BEGINNERS), the film is based on veteran journalist Lynn Barber's memoir of a teenage romance.

It's 1961 and 16-year old Jenny (Carey Mulligan) is a young woman full of promise and intent to study at Oxford.  Her parents scrimp to pay for extra tuition and foist their anxieties upon her. She, though, dreams of pre-Raphaelite paintings and lies in bed swooning over Juliette Gréco records.

Salvation arrives in the form of dapper, thirty-something David (Peter Sarsgaard), who drives a flashy Bristol and introduces her to art auctions, jazz clubs and sophisticated restaurants... and threatens to deflect her disastrously from her liberating future.

Daily Telegraph described it as "A delightful, resonant film; a great advertisement for Scherfig's self-effacing, but socially probing, directorial style". Total Film said it is "one of this year's most captivating British dramas, with a breakthrough turn from an actress we'll be seeing a lot more of" and Empire Magazine said "a big, unforgettable central performance. Carey Mulligan passes with First-Class Honours". The Times said "This is a wonderful, life-affirming picture that deserves all the prizes it will undoubtedly win. I can't call it the best British film of the year because it's still only October. But I'd be amazed if a better one comes along".

An Education will be shown on Monday 28th June, at the Church Rooms, Church Lane, Lostwithiel. Tickets cost £4 and will be available in advance from Watts Trading or on the door if not already sold out. 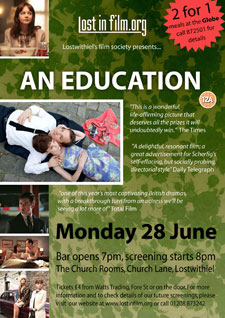