Our June Screen 2 film will be Beasts of the Southern Wild, the fairytale-like story of a little girl trying to understand her place in the universe. Quvenzhané Wallis earned much praise and an Oscar nomination for her performance.

Hushpuppy is an intrepid 6 year old girl who lives with her father, Wink, in the Bathtub, a southern Delta community at the edge of the world. Wink's tough love prepares her for the unravelling of the universe; for a time when he's no longer there to protect her. When Wink falls ill, nature flies out of whack, temperatures rise, and the ice caps melt, unleashing an army of prehistoric creatures called aurochs.

Time Out described it as "A dreamy but strikingly immediate and frayed-at-the-edges, child's-eye view of life on the margins of America" while Empire Magazine said "Beautiful, funny, timely and tender, this is the American arthouse movie of the year."

Beasts of the Southern Wild will be shown on Monday 10th June, at the Church Rooms, Church Lane, Lostwithiel. Doors and bar open 7pm, film at 8pm. Tickets cost £4 for adults and £2 for under 18s, and are available online now or in advance from Watts Trading or on the door if not already sold out. 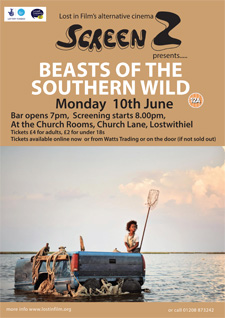