From ticket sales and donations collected on the night, we're delighted to announce that we'll be donating £150 to Merlin International, the charity which supported Benda Bilili and which continues to work in Democratic Republic of Congo. Many thanks to all who came along and donated so generously. As you will see from Merlin's website, this money will go a really long way providing basic medical treatment to those in great need.

Our January film will be Benda Bilili!, a documentary about African street musicians which is heartwarming, humbling and thought-provoking in equal measures.

Staff Benda Bilili are a group of homeless disabled musicians from Congo-Kinshasa who meet and rehearse in the city zoo. The band is joined by a teenage boy who plays guitar-like solos on a one-stringed lute he has designed and built himself from a tin can. Surrounded by their families, friends and fans, the documentary follows the musicians' seemingly impossible journey from the street to international fame.

Time Out described it as "An uplifting, understated and wholly engaging insight into a world entirely unlike our own..." while Empire Magazine said "Wielding inspiration and uplift in equal measure, this musical odyssey is one of the cinematic journeys of the year. Don't miss it."

Benda Bilili! will be shown on January 30th, at the Church Rooms, Church Lane, Lostwithiel. Doors and bar open 7pm, film at 8pm. Tickets cost £4 for adults and £2 for under 18s, and are available online now or in advance from Watts Trading or on the door if not already sold out. 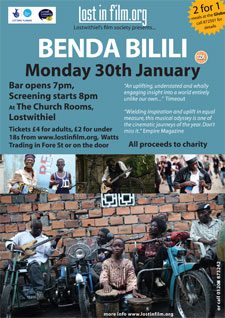