From ticket sales and donations collected on the night, we're delighted to announce that we'll be donating £200 to Lostwithiel Skate Park Project. Many thanks to all who came along and donated so generously.

A group of retired Brits travel to India to take up residence in what they believe is a newly restored and luxurious hotel. The Marigold Hotel turns out to be a shell of its former self but it nevertheless slowly begins to charm in unexpected ways, and they discover that life and love can begin again when you let go of the past.

USA Today called it "A refreshing, mature fairy tale with a top-notch ensemble cast" while New York Times said "Besides its sterling cast, its ace in the hole is its pungent depiction of Jaipur's teeming streets, which give an otherwise well-mannered movie a blinding splash of color."

Doors and bar open 7pm, film at 8pm. Tickets cost £4 for adults and £2 for under 18s, and are available online now or in advance from Watts Trading or on the door if not already sold out. 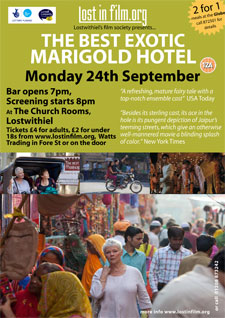