Our April Screen 2 film will be Blue Jasmine...

Highly acclaimed Woody Allen film about a New York socialite (Cate Blanchett), deeply troubled and in denial, who arrives in San Francisco and impose herself on her sister (Sally Hawkings). She looks like a million dollars, but isn't bringing money, peace, or love... 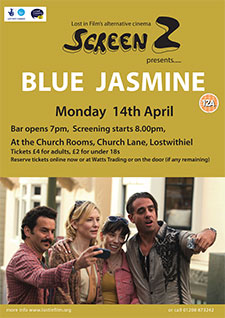