Our October film will be Brighton Rock, last year's adaptation of Graham Greene's classic novel set in the 1960s and starring Helen Mirren and John Hurt.

Pinkie is a small-time gangster, desperate to make his way in the Brighton underworld. Rose is a shy and bullied waitress who gets caught up in the murder of a rival gang member during her lunchbreak on the pier. Pinkie marries Rose to keep and eye on her and stop her testifying, and as a result she gets dragged into his increasingly destructive and violent world.

Empire Magazine said "it's an adaptation brimming with enough ideas to justify this second stick of Rock" and the Guardian described it as "A bold and exhilarating picture, summoning up, in its own way, a chill seafront breeze of guilt and shame."

Brighton Rock will be shown on 31st October, at the Church Rooms, Church Lane, Lostwithiel. Doors and bar open 7pm, film at 8pm. Tickets cost £4 for adults and £2 for under 18s, and are available online now or in advance from Watts Trading or on the door if not already sold out. 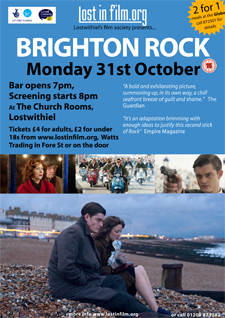