Our December film will be an early evening family screening of Captain America, the adventures of the Marvel superhero set in WW2 era.

Steve Rogers is rejected from military service because his health is too frail, so instead he volunteers for a project by US scientists to create a super soldier. When a Nazi spy infiltrates the project and assassinates the chief scientist, Rogers - codename Captain America - is sent to thwart the German plans.

Film 4 described it as "pure, unashamed, adrenaline-fuelled joy" while NewsBlaze said it "proves to be a riveting roller coaster ride from beginning to end".

Captain America will be shown on Wednesday 28th December, at the Church Rooms, Church Lane, Lostwithiel. Doors and bar open 6.30pm, film at 7pm. Tickets cost £4 for adults and £2 for under 18s, and are available online now or in advance from Watts Trading or on the door if not already sold out. 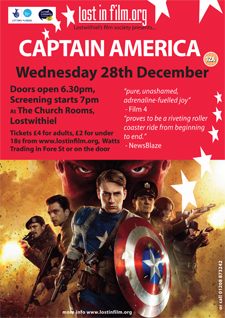