Our May Screen 2 film will be Captain Phillips... and is now sold out!

Captain Phillips is a multi-layered examination of the 2009 hijacking of the U.S. container ship Maersk Alabama by a crew of Somali pirates. It is simultaneously a pulse-pounding thriller, and a complex portrait of the myriad effects of globalization. 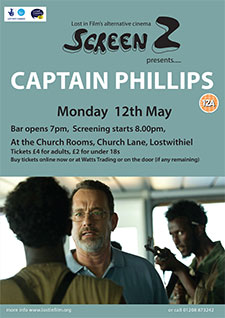