As part of Lostwithiel Food Festival, we're showing a special screening of Chocolat on Saturday 30th October, the closing night of the festival.

Special bars of Kernow Chocolate will be on sale at the film, with a golden ticket giving the lucky winner a free seat at the next Lost In Film screening.

Vianne Rocher and her young daughter are drifters who are met with skepticism and resistance when they move to a conservative town in rural France and open a chocolate shop during Lent. As Vianne begins to work her magic and help those around her, the townspeople are soon won-over by her exuberance and her delicious chocolates - except for the mayor, who is determined to shut her down. When a group of river drifters visit the town, Vianne teaches the townspeople something about acceptance, and finds love for herself along the way.

With an all star cast led by Juliette Binoche and including Alfred Molina, Johnny Depp and Carrie-Anne Moss, Chocolat is an all-time favourite and a delicious way to end Lostwithiel Food Festival. Hollywood Reporter described it as "a charming confection of a comic fable graced by an abundance of delectable performances" and Empire Magazine celebrated the "rare showcase for the wonderful Binoche".

Chocolat will be shown on Saturday 30th October, at the Church Rooms, Church Lane, Lostwithiel. Tickets cost £4 and will be available in advance from Watts Trading or on the door if not already sold out. 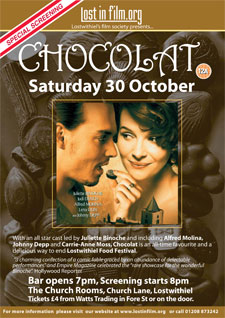