Our May film will be Coco Before Chanel and the Lostwithiel Twinning Association will be helping us to celebrate with a French themed evening.

Audrey Tautou stars in this lavish biopic of famed fashion designer Coco Chanel, based on the novel by Edmonde Charles-Roux. It portrays the story of Gabrielle "Coco" Chanel, who began her life as headstrong orphan, and through an extraordinary journey became the legendary couturier who embodied the modern woman and became a timeless symbol of success, freedom and style.

The film traces Coco's life from an impoverished childhood, through disastrous love affairs and years as a struggling tavern singer to the emergence of ‘Coco Chanel', an inveterate fantasist who fabricated her origins as assiduously as her suits.

Tautou's Coco is a boyish wisp of a creature in mannish clothes, which contrasted shockingly with the big flowery hats and corseted finery of the Edwardian age. Yet her cuteness is offset by square-jawed determination, a sulky demeanour and a will of iron.

Coco Before Chanel was written by director Anne Fontaine (La Fille de Monaco) and screenwriter Camille Fontaine in collaboration with Christopher Hampton (Dangerous Liaisons), with original costumes by Catherine Letterier (Cesar Award winner for Bon Voyage and the Messenger: The Story of Joan of Arc).

The production was given the support of the Maison CHANEL, who opened their archives and collections.

Little White Lies described it as "An epic story that gradually develops into a beautiful and beguiling homage to the first lady of fashion", and Film 4 said "this is an inspiring portrait of a woman who cut her own cloth to fit". Daily Telegraph said "Tautou is just terrific, and to recall an actress who could so dominate your memory of a movie one needs to think back to Audrey Hepburn" and Time Out said "Tautou is wonderful - a black-eyed urchin so sullen and furious you forget how beautiful she is until she smiles".

Coco Before Chanel will be shown on Monday 24th May, at the Church Rooms, Church Lane, Lostwithiel. Tickets cost £4 and will be available in advance from Watts Trading or on the door if not already sold out. 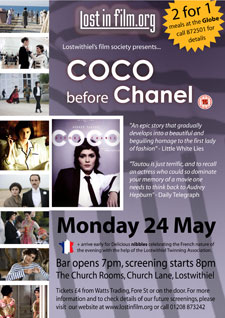