Our October Film will be Defiance directed by Edward Zwick.

Daniel Craig, Liev Schreiber and Jamie Bell star as the Jewish Bielski brothers who escape from Nazi-occupied Poland after the slaughter of their parents and girlfriends, into the Belarussian forest. There they join Russian resistance fighters and endeavor to build a village in order to protect themselves and about 1,000 Jewish non-combatants who are in danger.

‘Zwick's film is absolutely brilliant (and horrible) about the brute business of survival... It is haunting, impressive and moving.' - James Christopher, The Sunday Times.

‘It's handsome looking, performances are strong and it really is fascinating to see this overlooked story'. -  Julie Rigg, Movie time

Defiance will be shown on Monday 25th October at the Church Rooms, Church Lane, Lostwithiel. Tickets cost £4 and are available in advance from Watts Trading or on the door if not already sold out. 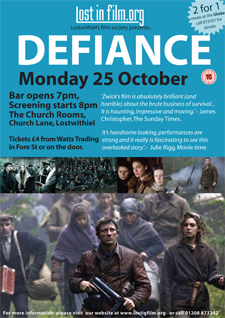