Our February screen 2 film will be Fill the Void...

A tender and fascinating window into the world of an ultra Orthodox community in Tel Aviv where a devout 18-year-old Israeli is contemplating marriage with the husband of her late sister.

'A fascinating and emotionally gripping drama with a sharply written, understated script and a pair of terrific performances from Hadas Yaron and Yiftach Klein'. Matthew Turner, ViewLondon 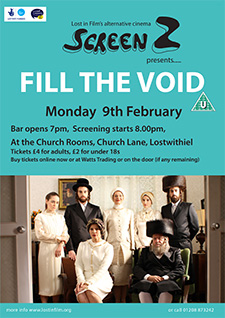