Our October film was Frost/Nixon, the story of the legendary interviews between jet-setting TV personality David Frost and disgraced ex-president Richard Nixon. Directed by Ron Howard and based on a stage play, the film shows the motivations, build-up and finally the battle of words between the two men. Frost wanted to elicit a confession or apology to secure his place as a heavyweight journalist while Nixon wanted to win back a place in the hearts of the American people.

The Observer described the film as “riveting”, Time Out New York said Frank Langella's Nixon was a “magnificent performance”. 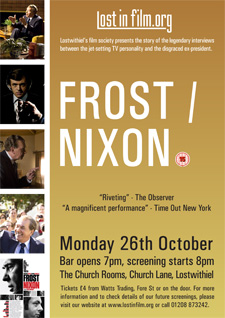