Our November film was Gran Torino. Directed by and starring Clint Eastwood in what is rumoured to be his last acting role, the film tells the story of Walt Kowalski, a foul-mouthed, bigoted, gun-wielding Korean War veteran who lives in a run-down, ethnically diverse neighbourhood in Detroit.

The film is a homage to the hard-as-they-come characters Clint Eastwood has played throughout his career, from Dirty Harry to Unforgiven, but there's comedy in the contrast between Walt's straight-talking and the carefully chosen words of his sons and priest.

Empire described the film as "an extraordinary piece of work" while Rolling Stones said it's "a humdinger of a valedictory". 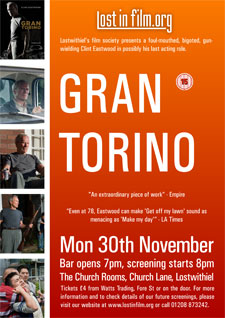