We're opening our 7th Season with The Grand Budapest Hotel on 29th September.

Gustave H (Ralph Fiennes) is a legendary concierge at a famous European hotel between the wars. Lobby boy Zero Moustafa becomes his most trusted friend in a story involving the theft and recovery of a priceless Renaissance painting and the battle for an enormous family fortune. The latest Wes Anderson film features an all star cast against the back-drop of a suddenly and dramatically changing Europe.

'Fiennes is magnificent, his droll wit and a "keep calm and carry on" delivery occasionally peppered with highlights of profanity and fire. Comedic timing perfection.' The Mercury

"The Grand Budapest Hotel is a fantastic box of tricks, a collection of treats, one of them being the way big-name actors keep on popping up in cameo roles" Evening Standard 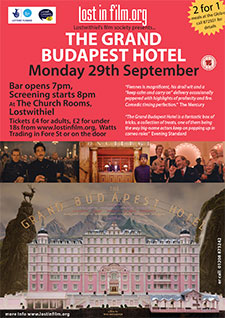