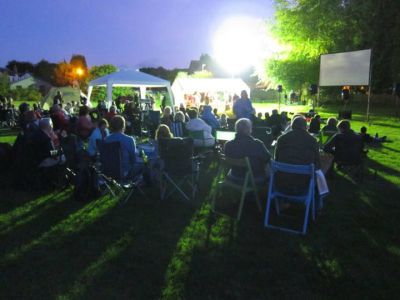 We held a special outdoor screening of original The Italian Job featuring Michael Caine and Noel Coward on Saturday 28th August, in conjunction with the Lostwithiel Rotary to raise money for their Kosovo Appeal. It was an out-and-out success and in total an amazing £700 was raised for the Kosovo Appeal.

Do we need to remind you of the plot? A heist in Italy, car chases in Minis, a cliff-hanger and some of the most classic lines in cinema history.

The film was shown on King George V playing field, Lostwithiel. Tickets were £5 for adults, £2.50 for under 15s and free for under 2s. The Rotary provided a hog roast and bar. Bring your own picnic blanket or camping chairs. Sorry no dogs.