Our March film will be Jane Eyre, a gorgeous re-telling of the classic Charlotte Brontë novel with an all-star cast including Mia Wasikowska (Alice in Wonderland), Sally Hawkins (Made in Dagenham), Jamie Bell (Billy Elliot) and Judi Dench.

After a bleak childhood, Jane Eyre is happy to be appointed governess at Thornfield Hall. Her employer Mr Rochester is cold and abrupt at first, but warms to Jane and a close friendship develops. Just at the moment Jane seems to have found happiness, she discovers that Mr Rochester is harbouring a terrible secret.

This is London described it as "highly recommendable" while the Daily Telegraph said "Fukunaga's delicate artistry leaves it hard to ask for much more." Chicago Sun-Times says of the actress playing Jane Eyre: "Mia Wasikowska... succeeds with restraint, expressing a strong moral compass".

Jane Eyre will be shown on Monday 26th March, at the Church Rooms, Church Lane, Lostwithiel. Doors and bar open 7pm, film at 8pm. Tickets cost £4 for adults and £2 for under 18s, and are available online now or in advance from Watts Trading or on the door if not already sold out. 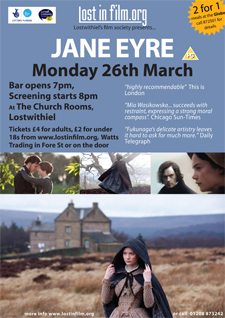