Our May film was Juno, an American comedy-drama directed by Jason Reitman. Ellen Page stars as the title character, a sharp-witted and independent-minded teenager confronting an unplanned pregnancy while still at High School, and the events that follow.

Juno was shown on Monday 25th May, at the Church Rooms, Church Lane, Lostwithiel. Doors and the bar opened at 7pm and the film screening will started at 8pm. 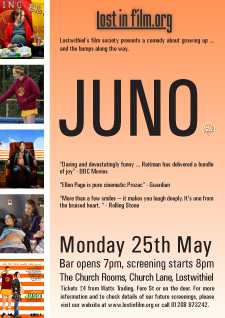