Our November Screen 2 film will be Le Havre, a warm-hearted portrait of the French harbour of the same name.

Please note: Le Havre is in French with subtitles

When an African boy arrives by cargo ship in the port city of Le Havre, an ageing shoe shiner called Marcel takes pity on the child and welcomes him into his home. With the support of his community, Marcel stands up to officials and protects the boy from deportation. A charming political fairy tale full of deadpan humour.

The Guardian descriped it as "satisfying and distinctively lovable film" while the Daily express said "The intricately woven tale of hide and seek is full of priceless, poker-faced comedy and heartrending tenderness."

Le Havre will be shown on November 12th, at the Church Rooms, Church Lane, Lostwithiel. Doors and bar open 7pm, film at 8pm. Tickets cost £4 for adults and £2 for under 18s, and are available online now or in advance from Watts Trading or on the door if not already sold out. 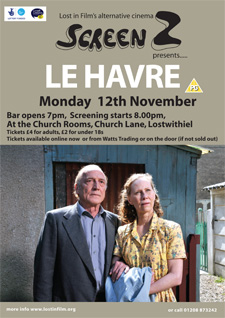