Le Week-end is now SOLD OUT.

Our April main film will be Le Week-end...

Jim Broadbent and Lindsay Duncan play a long-married couple who revisit Paris for a long weekend for the first time since their honeymoon, in hopes of rekindling their relationship - or, perhaps, to bring it to an end. Written by Hanif Kureshi and also starring Jeff Goldblum. 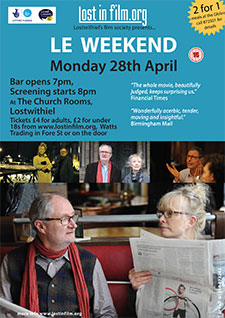