Our May Screen 2 film will be Life of Pi, the spectacular Academy Award winning Ang Lee adaption of the popular and supposedly "unfilmable" book

Life of Pi is a magical adventure story about Pi Patel, the son of a zoo keeper in Pondicherry, India. His family decides to move to Canada and take passage on a cargo ship. After a shipwreck, Pi finds himself adrift in the Pacific Ocean in a lifeboat with a zebra, a hyena, an orangutan and a Bengal tiger named Richard Parker, all fighting for survival.

Time Out described it as "marvellously ambitious, and unforgettably gorgeous to look at" while the Dail Mail said "Life Of Pi must be the most beautiful film of the year, a technical marvel, and magic realism at its most magical."

Life of Pi will be shown on Monday 13th May, at the Church Rooms, Church Lane, Lostwithiel. Doors and bar open 7pm, film at 8pm. Tickets cost £4 for adults and £2 for under 18s, and are available online now or in advance from Watts Trading or on the door if not already sold out. 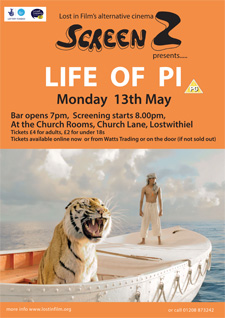