Our January film was Mamma Mia!, the box office smash about a bride-to-be trying to find her real father with hit songs by ABBA.

Before the performance the Lost in Song choir performed the song Mamma Mia! and we drew a raffle for the DVDs of our Autumn season films: Son of Rambow, Darjeeling Limited, Persepolis and Ratatouille.

Starring a roll call of stars including Meryl Streep, Julie Walters, Pierce Brosnan and Colin Firth, Mamma Mia! is set on an idyllic Greek island. Time Out said "it’s as camp as Christmas and as enjoyable as a pantomime" while The Times described it as "sharp, hilarious and so beautifully shot that you can almost smell the Ambre Solaire".

Mamma Mia! was shown on Monday 26th January, at the Church Rooms, Church Lane, Lostwithiel. Doors and the bar open at 7pm and the film screening will start at 8pm. Tickets cost £4 and are available in advance from Watts Trading, Fore Street, Lostwithiel, or on the door if they haven't sold out. 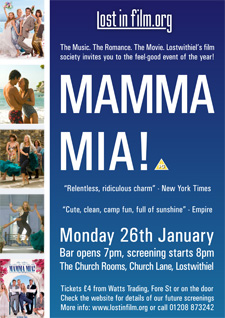