Our second season began in September with Man On Wire. Recreated through archive material, Man On Wire is a documentary about Philippe Petit, a French wire-walker who in 1974 broke into the World Trade Centre and staged a wire-walk between the two towers. The story has the suspense and tension of a heist movie and was directed by James Marsh, who was born in Truro.

Man On Wire was shown on Monday 28th September, at the Church Rooms, Church Lane, Lostwithiel. 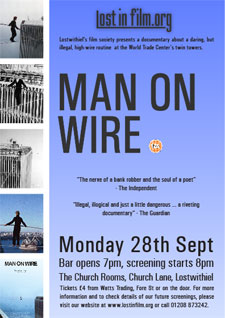