Our April film will be Midnight in Paris, Woody Allen's latest romantic comedy.

Gil and Inez travel to Paris as a tag-along vacation on her parents' business trip. Gil is a successful Hollywood writer but is struggling on his first novel. He falls in love with the city and thinks they should move there after they get married, but Inez does not share his romantic notions of the city or the idea that the 1920s was the golden age. When Inez goes off dancing with her friends, Gil takes a walk at midnight and discovers what could be the ultimate source of inspiration for writing. Gil's daily walks at midnight in Paris could take him closer to the heart of the city but further from the woman he's about to marry.

Empire magazine said "Light, assured, and utterly charming: Woody Allen's sublime gifts are still intact." and Movie Talk described it as "a comic fantasy with all the effervescence of vintage champagne".

Midnight in Paris will be shown on 30th April, at the Church Rooms, Church Lane, Lostwithiel. Doors and bar open 7pm, film at 8pm. Tickets cost £4 for adults and £2 for under 18s, and are available online now or in advance from Watts Trading or on the door if not already sold out. 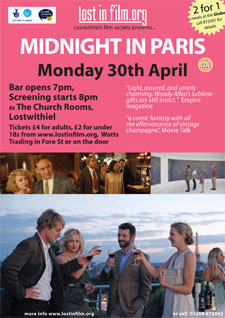