Our December film was a special Sunday matinee screening of Monsters vs Aliens. A fancy dress competition will be held before the screening with prizes for the best dressed monsters and aliens. Snacks, soft drinks, teas and coffees will be available.

When a radioactive meteor hurtles into Susan Murphy (voiced by Reese Witherspoon) on her wedding day, she is transformed into a towering, platinum-haired giant. Taken away by the government and dubbed "Ginormica," Susan is introduced to other scientific oddities, including the amphibious Missing Link (Will Arnett), the dim blob B.O.B. (Seth Rogen), and the brilliant, bug-headed Dr. Cockroach (Hugh Laurie). When a massive alien robot sent by the scheming Gallaxhar (Rainn Wilson) appears in San Francisco, the President is persuaded to enlist the motley crew of Monsters to save the world from imminent destruction. 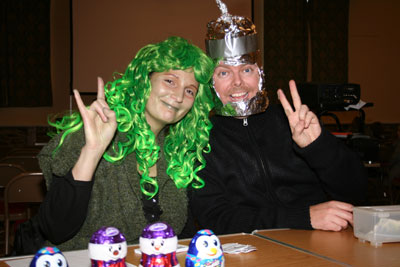 Sunday Mail said it's "as exciting as any top live-action movie", USA Today said it has "dazzling colors, winning characters and energetic visual effects" and Premiere said it's "a pleasure to watch for everyone".

Monsters vs Aliens was shown on Sunday 20th December, at the Church Rooms, Church Lane, Lostwithiel. Doors open at 2pm and the film was shown at 3pm.