Sam Rockwell plays an employee of a lunar mining company, nearing the end of his three year contract stationed on the moon. Kevin Spacey voices GERTY, the computer on his base. As Sam's return to earth approaches and loneliness starts to take its toll, strange events start to occur. The film's themes of isolation and the human condition has echoes of sci-fi classics such as 2001: A Space Odyssey, Solaris and Alien.

Sunday Times said "Moon is a gripping sci-fi tale, but also has a lot of heart and humanity". Rolling Stone described it as a "mesmerizing mind-bender" and Wired said "Moon delivers a stirring, character-driven story".

Moon will be shown on Monday 22nd February, at the Church Rooms, Church Lane, Lostwithiel. Tickets cost £4 and will be available in advance from Watts Trading or on the door if not already sold out. 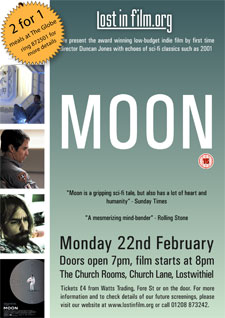