Our January Screen 2 film will be Moonrise Kingdom, the latest film from the warm and whimsical world of writer/director Wes Anderson.

On an island off the coast of New England in 1965, two 12 year olds fall in love and make a secret pact to run away together. As various authorities try to hunt them down, a violent storm starts to brew off-shore. Bruce Willis plays the sheriff, Edward Norton is a Scout troop leader and Bill Murray and Frances McDormand are the girl's parents in this poignant but delightfully funny story.

Moonrise Kingdom will be shown on Monday 14th January, at the Church Rooms, Church Lane, Lostwithiel. Doors and bar open 7pm, film at 8pm. Tickets cost £4 for adults and £2 for under 18s, and are available online now or in advance from Watts Trading or on the door if not already sold out. 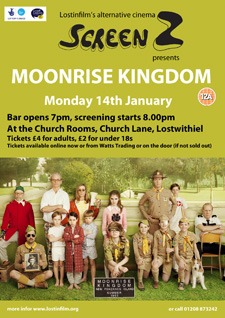