Our March film will be Mother, a South Korean murder mystery with a number of twists. Stylish, clever and full of pathos, the film moves from humour to tension and darkness.

An over-protective mother lives quietly with her 28-year-old son, Do-joon, providing herbs and acupuncture to neighbours. A local girl is brutally murdered and Do-joon is charged with the killing. When local police can't be bothered to investigate further, his mother picks up the case.

Mother is in Korean with English subtitles.

Time Out said the film is "unpredictable and quietly devastating, Mother is [director] Bong's first masterpiece" while New of The World said "If you're a fan of foreign cinema, keen to catch one of this year's best imports...Mum's the word".

Mother will be shown on 28th March, at the Church Rooms, Church Lane, Lostwithiel. Tickets cost £4 for adults and £2 for under 18s, and are available online now or in advance from Watts Trading or on the door if not already sold out. 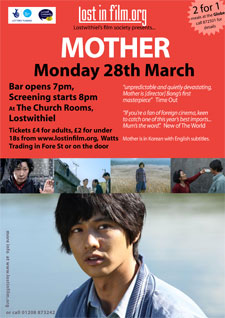