Our May main film will be Mr. Turner...

Mr. Turner explores the last quarter century of the great if eccentric British painter J.M.W. Turner. Throughout this, he travels, paints, stays with the country aristocracy, visits brothels, is a popular if anarchic member of the Royal Academy of Arts, has himself strapped to the mast of a ship so that he can paint a snowstorm, and is both celebrated and reviled by the public and by royalty. 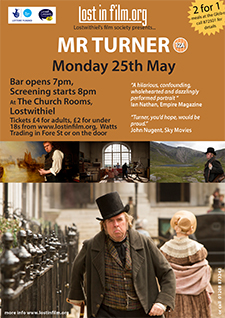