Our November Screen 2 film will be the documentary Muscle Shoals...

Located alongside the Tennessee River, Muscle Shoals, Alabama is the unlikely breeding ground for some of America's most creative and defiant music. Under the spiritual influence of the 'Singing River' as Native Americans called it, the music of Muscle Shoals changed the world and sold millions upon millions of copies. At its heart is Rick Hall who founded FAME Studios. Overcoming crushing poverty and staggering tragedies, he brought black and white together in Alabama's cauldron of racial hostility to create music for the generations while giving birth to the 'Muscle Shoals Sound'

'Hall's backstory, riddled with tragedy, gets the proper attention and respect here. But it's the music that won't let you stop watching.' New York Daily News

'...this is an essential document of a defining era when 'soul' really meant something.' Time Out 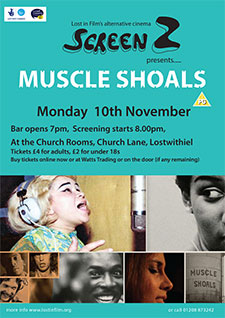