Our December film will be Nativity! The rivalry between two primary schools over their annual Christmas plays reaches new lows when a rumour gets around that a Hollywood producer will be in attendance. Primary school teacher Paul Maddens (Martin Freeman - The Office, Hitchhikers Guide To the Galaxy) is being charged with the biggest challenge of his life - mounting the school's musical version of the Nativity. Competing against the posh local school for the honor of best reviewed show in town, the stakes are raised when Paul idly boasts that his ex-girlfriend Jennifer, a Hollywood Producer, is coming to see his show with a view to turning it into a film. The only trouble is - they haven't spoken in years. With eccentric assistant Mr Poppy fueling his 'little white lie', Maddens suddenly finds himself a local celebrity and at the center of quarreling parents and over-excited children desperate in their bid for fame and fortune. Now Maddens' only hope is to get back in touch with Jennifer and lure Hollywood to town so that everybody's Christmas wishes come true.

Radio Times said "the youthful cast of the nativity play itself... are so natural on camera that you can't help but smile." while The Daily Telegraph said "The actual show is a genuine delight, catchily penned by Isitt herself, and asking the kids to be kids, in all their cloying, charming, Britain's Got Not Enough Talent glory."

Nativity! will be shown on Monday 27th December at St Bartholomew's Church, Church Lane, Lostwithiel. Tickets cost £4 and are available in advance from Watts Trading, via the Lost In Film website or on the door if not already sold out. Doors open at 7pm, film at 8pm. Teas and coffees will be available, BYO alcohol in return for a small corkage fee towards Church funds. 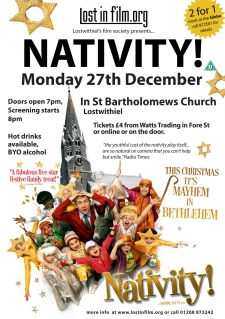