Our January Screen 2 film will be Nebraska...

"NEBRASKA" is a father and son road trip, from Billings, Montana to Lincoln, Nebraska that gets waylaid at a small town in central Nebraska, where the father grew up and has scores to settle. Told with deadpan humor and a unique visual style, it's ultimately the story of a son trying to get through to a father he doesn't understand.

'Nebraska is an absolutely enchanting film, so funny, so touching, ringing true - for me right up there with the year's best.' This is London 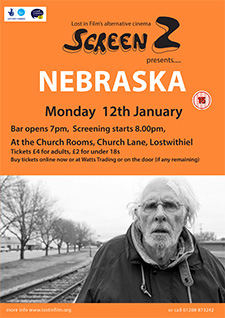