Our March Screen 2 film will be Northern Soul...

Set in 1974, an authentic and uplifting tale of two friends whose horizons are opened up by the discovery of black American soul music.

'This feisty, frequently amusing chronicle of one young man's journey through the dancehalls of Lancashire nails its time and place.'  Tom Huddleston, Time Out 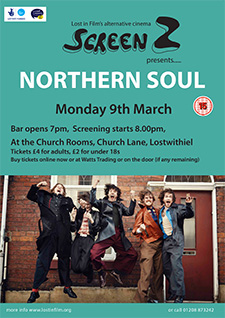