Our September film will be Nowhere Boy, the debut feature of Sam Taylor-Wood which tells the story of John Lennon's childhood.

John Lennon is a spirited teenager, curious, sharp and funny, growing up in the shattered city of Liverpool. Two extraordinary sisters tussle for his love - Mimi, the formidable aunt who raised him from the age of 5 and Julia, the spirited mother who gave him up to Mimi's care. Yearning for a normal family, John escapes into art and the new music flooding in from the US. His fledgling genius finds a kindred spirit in the young Paul McCartney. But just as Johns new life begins, the truth about his past leads to a tragedy he would never escape.

The Sunday Times said "Taylor-Wood has opted for a natural realism, free of arty flourishes...She is happy to provide a canvas on which her ­talented cast can shine, and they do." while the Observer said "Rather than dwelling on the unique circumstances that produced a musical genius, it's an affecting movie about coming of age and leaving home, and about the radical changes in British life since the Second World War."

Nowhere Boy will be shown at the Church Rooms, Church Lane, Lostwithiel. Doors and the bar open at 7pm, and the film screening will start at 8pm. Tickets cost £4 and are available in advance from Watts Trading, Fore Street, Lostwithiel, or on the door if they haven't sold out. 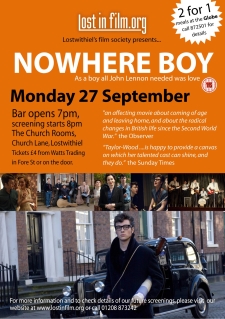