Our February main film will be Papadopoulos & Sons...

Following his ruin in the latest banking crisis, a self-made millionaire reluctantly re-unites with his estranged freewheeling brother to re-open the abandoned fish and chip shop they shared in their youth.

'There's a warmth and charm about Marcus Markou's feature debut that makes it hard to resist.' Total Film

'...a great restorative for anyone having a bad day.' Gambit 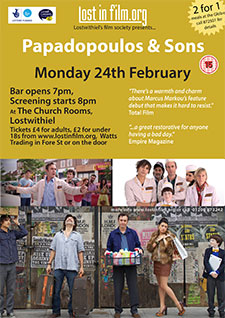