The film for November was Perspolis (Cert 12A), a poignant coming-of-age story of a precocious and outspoken young Iranian girl that begins during the Islamic Revolution.

As well as being Oscar-nominated for Best Animated Feature, it won the Jury Prize at the Cannes Film Festival and was nominated for the Palme d'Or. The film appeared in many critics' top ten lists of the best films in 2007. The Observer said it, "makes the transition from comic strip to big screen with ease and exuberant humour" and The Times describes it as "a big, beautifully woven tale". 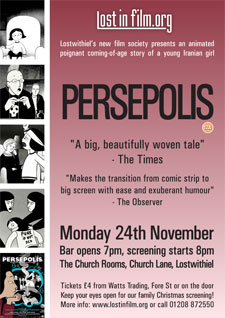