Our March main film will be Philomena...

Tickets are sold out - please contact us to put join the waiting list in case we have returns.

Funny and tender film about a world-weary journalist who picks up the story of a woman searching for her son who was taken away after she became pregnant and was forced into a convent. Starring Judi Dench and Steve Coogan.

'Lovingly crafted and beautifully told, Philomena is one of this year's highlights.' MovieFIX

'You are unlikely to see a better British film this year.' Daily Express 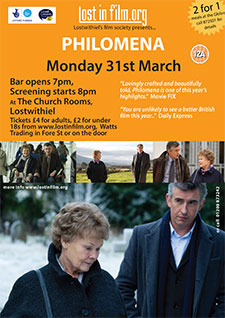