The Twinning Association are holding a special fundraiser screening of Potiche.

It's 1977 and Catherine Deneuve plays Suzanne, a trophy wife whose imperious and philandering husband runs an umbrella factory. During a strike he suffers a heart attack so she takes over the business with great success, but problems appear in the form of her two grown up children, her recuperated husband and Babin, an old flame and now a left-wing mayor, played by Gerard Depardieu.

"Catherine Deneuve is on magnificent form -- singing and dancing! -- in François Ozon's comedy of female emancipation in the 1970s." Independent

"It is a period pastiche executed with brilliant attention to detail and a weird, suppressed passion, like a sitcom in a bad dream." Guardian

Tickets cost £4 for adults and £2 for under 18s, and are available online now or on the door if not already sold out. 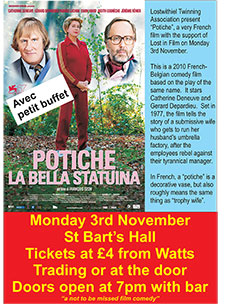