Our Screen 2 October film will be Precious, a grim yet ultimately triumphant film about abuse and inner-city life.

Adapted from Sapphire's best-selling novel, Precious tells the story of an overweight, illiterate teen from Harlem who is pregnant with her second child. Her future holds little prospect until she is invited to enrol at a new school. With cameos from Lennie Kravitz and Marie Carey, a superb performance from Mo'nique and a stunning debut from Gabourey "Gabbie" Sidibe, Precious is an inspirational drama which is at times harrowing.

Empire Magazine said that "dramatically it's a blow-your-socks-off triumph. Be moved. Very, very moved." while Time Out described it as "A film full of life and love".

Precious will be shown on Thursday 20th October, at Oasis in the Community Centre, Lostwithiel. Doors 7pm, film 7.30pm. BYO drinks. Tickets cost £4 for adults and £2 for under 18s, and are available online now or on the door if not already sold out. 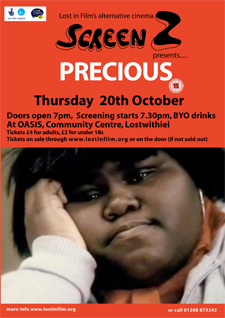