Our February main film will be Pride. We've turned off online sales as we are nearly full - there will be a few available on the door.

In 1984 20 year old closet gay Joe hesitantly arrives in London from Bromley for his first Gay Pride march. Not only are gays being threatened by Thatcher but the miners are on strike in response to her pit closures and Northern Irish activist Mark Ashton believes gays and miners should show solidarity.

'You not only have the feel-great hit of the year, but an inspirational story of how disparate communities are always closer than they think.' Colin Fraser, Filmink 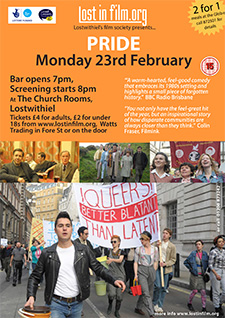