Our special film for Christmas was a Sunday matinee screening of Ratatouille (Cert U), the Oscar-winning computer-animated family feature by Pixar. The movie follows the adventures of Remy, a country rat who winds up in Paris where he fulfills his dream of cooking. 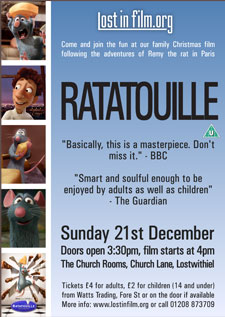