Our January main film will be Robot & Frank...

Set in the near future, retired cat burglar Frank (Frank Langella) is struggling to live on his own. He doesn't want to go into a nursing home so his children buy a walking, talking robot to look after him. Initially hostile, Frank realises he can take advantage of the situation. Funny and heart-warming story about finding friends in unexpected places. 2 for 1 meal deal at the Globe

'...a gleefully subversive character study of a charming but unapologetic rogue.' says Empire 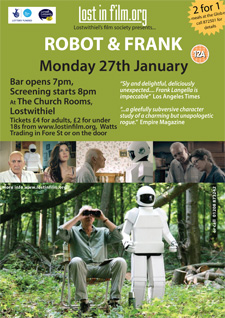