As part of our 5th birthday celebrations this is a FREE screening!

Our October Screen 2 film will be Rust and Bone, a powerful and challenging film about two very different people who are brought together by circumstance.

French with subtitles. Warning: some graphic scenes of fighting and sex.

A struggling single father helps a killer whale trainer recover her will to live following a terrible accident that leaves her confined to a wheelchair. Her spirit broken by the same tragedy that took her legs, Stephanie gradually finds the courage to go on living through time spent with Ali -- a man with precious little pity, but an enormous love of life.

Toronto Star said "An unusual and unsettling love story, Rust and Bone shows once again that Oscar-winning French actress Marion Cotillard is as close to perfect as any female has ever been onscreen." while Lost Angeles Times said "Romantic but pitiless, fearlessly emotional as well as edgy, "Rust and Bone" is a powerhouse."

Tickets are FREE and are available online now or in advance from Watts Trading or on the door if not already taken. 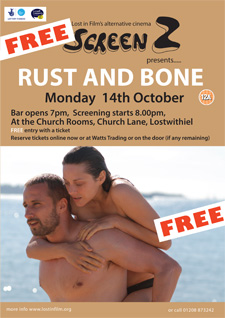