Salmon Fishing in the Yemen (12A)

Our October film will be Salmon Fishing in the Yemen, the film about a romance between two very different people brought together by one man's outlandish dream.

Ewan MacGregor plays Dr Alfred Jones, a government fisheries expert who is approached by a consultant (Emily Blunt) to help her sheik employer bring the sport of fly-fishing to the desert. Despite reservations, Dr Jones is forced to take part by the Prime Minster's press secretary (Kirstin Scott Thomas) but ends up discovering faith and love along the way.

Sun online described it as "engaging, uplifting and thoroughly enjoyable" while the Daily Mail said that "Blunt and McGregor act beautifully and their tale is charming".

Salmon Fishing in the Yemen will be shown on 29th October, at the Church Rooms, Church Lane, Lostwithiel. Doors and bar open 7pm, film at 8pm. Tickets cost £4 for adults and £2 for under 18s, and are available online now or in advance from Watts Trading or on the door if not already sold out. 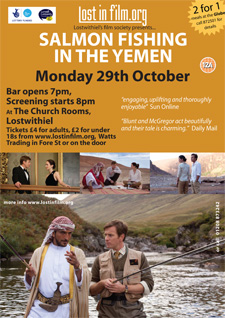