Searching for Sugar Man (12A)

Our main February film will be Searching for Sugar Man, the documentary about the incredible true story of the greatest '70s rock icon who never was.

Discovered in a Detroit bar in the late '60s, Rodriguez was expected to be the greatest recording artist of his generation. In fact, his album bombed and he disappeared into obscurity amid rumors of a gruesome on-stage suicide. But a bootleg recording found its way into apartheid South Africa where, over the next two decades, Rodriguez became more famous than Elvis. The film follows the story of two South African fans who set out to find out what really happened to their hero.

Rolling Stone described it as "a fresh and unexpected documentary that plays like a nail-biting mystery" while USA Today found it "thoroughly captivating, often exhilarating".

Searching for Sugar Man will be shown on Monday 25th February, at the Church Rooms, Church Lane, Lostwithiel. Doors and bar open 7pm, film at 8pm. Tickets cost £4 for adults and £2 for under 18s, and are available online now or in advance from Watts Trading or on the door if not already sold out. 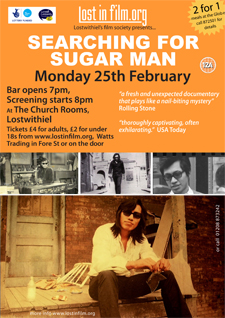