Our Screen 2 film will be Senna, the documentary about the Brazilian Formula One racing driver.

Please note the change of location and day from previous Screen 2 films.

Not just one for motor racing fans! Ayrton Senna won the F1 world championship three times before his death at age 34. His ambition, achievements and clashes with rival drivers (notably Alain Proust), racing authorities and sponsors both on and off the track are the stuff of legend.

Movie Talk said "You don't have to be a Formula 1 nut to enjoy this enthralling documentary" and Los Angeles Times described as having "the pace of a thriller, a story of motors and machines that is beyond compelling because of the intensely human story it tells."

Senna will be shown on Friday 10th February, at the Church Rooms, Church Lane, Lostwithiel. Doors and bar open 7pm, film at 8pm. Tickets cost £4 for adults and £2 for under 18s, and are available online now or in advance from Watts Trading or on the door if not already sold out. 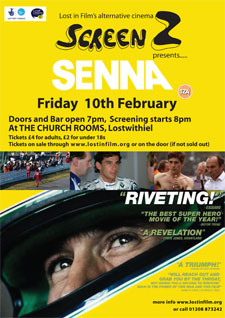