Our June film was Slumdog Millionaire, the exuberant feel-good film which took 8 Academy Awards earlier this year. Jamal Malik is an orphan from the slums of Mumbai, one question away from the grand prize on India’s “Who Wants To Be A Millionaire?” The events that lead him to the show make up the wonderful and moving story of his life.

Chicago Sun Times said the film is "a breathless, exciting story, heartbreaking and exhilarating", while Rolling Stone said "the film is a visual wonder".

The Indian theme continued with a market stall selling goods to raise money for a charity that support children in the slums of Delhi, Cobra beer and bombay mix available from the bar. 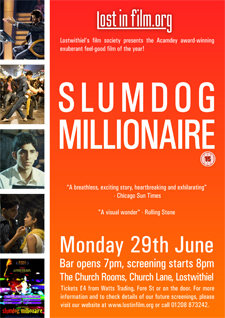