Released in the UK in April this year Son Of Rambow (cert 12A) is a comedy-drama set on a long English summer in the early ‘80s.  This is a film about friendship, faith and the tough business of growing up.  "Wildly funny" said Film Journal International; Giant Magazine said "Makes you feel like a kid again".

Son Of Rambow was shown on Monday 29th September, at the Church Rooms, Church Lane, Lostwithiel. 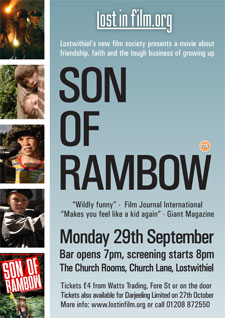